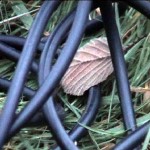 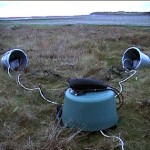 In Preseli, West Wales, Whitehead draws a small triangular field on the
ground. At 2 points he places the amplifiers inside the buckets. Wearing
binaural microphones on his wrists, the resulting feedback field is sensitive
to any small movements he makes, and to changes in his environment. This
sound is transmitted via 2 mobile phones to Cardiff.

Signals are received by 2 mobile phones, and projected into a triangular
speaker configuration consisting of 2 channels plus a phase-inverted mono
mix. Whitehead’s actions within the remote environment are expanded and
relocated into the receiving space.

TEST is a new research and development project examining the translocation
of movement, touch, and thought via sound.

Sponsored by Cardiff 2008 in association with Chapter. Duration
12 mins max.