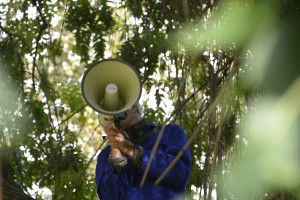 Calling Tree is a peripatetic performance project that engages with places, people and wild life and attempts to reveal complex webs of ecological relationships and atmospheres present through a series of performance residencies in significant urban trees.

Beginning in 2014 in a large sentinel oak tree in Betws Y Coed in North Wales, the work has subsequently readapted to trees in Bruce Grove Park, Tottenham for LIFT 2016 and most recently in a number of mature Plane trees in a former cemetry, St. Georges Gardens in Central London as part the Bloomsbury Festival, October 2016.

Through long periods of inhabitation, often seasonal, aerial performers, dancers and singers develop a language of movement, song and agitation in and around chosen urban trees. The work engages with the social and environmental realm of each urban space, inviting conversation and participation from local communities, both through spontaneous conversations and relationships with schools and other local agencies.

Through a daily presence, the performance is constructed and composed within a public space, in view of passers by and park life. The work is sensitive to its social context and also draws on research into the particular bird life of each park and borough. Many of the songs, by Barnaby Oliver, are composed of the actual bird names present in each locality, cut up and arranged into new languages they are called out at intervals from the tree canopies by megaphone. Occuring at intervals are a series of running passages beneath the trees and across the ground, by artist and wild life educator Ben Stammers (sometimes he has been accompanied on these runs by local residents). Attached to his back are 3 megaphones pre-recorded with bird calls, both from local species and migrants. The runs create energetic and often surprising diversions and occur at regular intervals through performances that can last up to 4 hours.
In each performance Ben also spends time climbing trees throughout the park, or public space, listening and calling back to singing birds, often engaging in prolonged calls and responses. In St.Georges Gardens in October, Ben initiated a daily twilight conversation with blackbirds, which often lasted until night- fall.
Choreography and direction: Simon Whitehead and Rosemary Lee
Composition: Barnaby Oliver and Terry Mann
Co produced by Artsadmin.