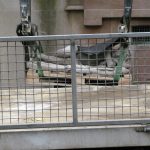 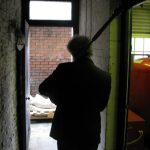 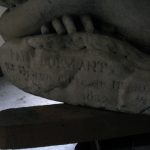 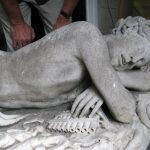 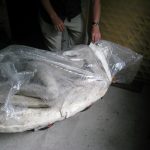 Whilst Glyn Vivian Gallery was in a process of major refurbishment a number of artists were invited to respond to the building in transition whilst the collection was removed and taken into storage.

In the summer of 2011, on a tour of Glyn Vivian Gallery with Archivist Raymond Jones, we came across a large dusty bubble-wrapped body in the boiler room. There was a distinct quietude to the moment. Pan Dormant, a marble statue of Pan reclining by French sculptor Sylvestre Joseph Brun, had been in the Glyn Vivian basement for 23 years.

In Greek mythology Pan is a pastoral deity of the wilds, shepherds, flocks and music. I began to imagine an event that announced Pan’s removal from the building and the disruption of his slumber…

On January 12th 2012 I invited Swansea folk musician Ceri Rhys Matthews to play bagpipes as Pan was manhandled out of the boiler room. I was interested in the ensuing pandemonium, the intimate struggle of the men who lifted, pushed and elevated Pan onto a low loader at the back of the gallery.

I made a field recording of the event with binaural microphones and sent the raw recording to sound artist and long-term collaborator Barnaby Oliver. Barnaby responded with an alteration of the original.

Pan Dormant is now on public display in the foyer of the re- opened Glyn Vivian Gallery.

I wanted to try looking at this from the point of view of Pan himself:

Pan the universal and immortal archetype.
Pan as his Ancient Greek incarnation.
Pan as conceived by the artist and his times.
Pan as embodied in this particular representation.

Just suppose Pan has a consciousness, scattered through this hierarchy of incarnations – the immensity of his own awareness of time and space.

So this is just part of a long sleep briefly interrupted, a reverie intruded upon. (Of course it would take a lot more to wake him.) How does a god dream?

The pipes are the key –  as usual, music is the gateway, and of course the pipes are his favourite. To make the connection I took the pitches sounded on these pipes, and expanded them to create a limitless harmonic plane with its own life and logic, of which we hear a tiny fragment. From time to time the events of our world break through, and there is an exchange of sorts. But in the end I imagine a god has bigger things to dream about.