Developed over 2 years this solo piece marks a return to a studio practice and emerges from an extended period of working from home in west Wales. The solo is a meditation on dislocation, the practices of making home and sheltering; referencing the biography of an embryo, the Apollo 9 mission, the territorial behaviour of ravens, the writings of Palestinian activist Rajah Shehadah and
David Bowie.

Resembling ephemeral line drawings, these studies emerge from gestures, voice, narratives and the systematic movement of an old school table, on which is inscribed the name ‘Maynard’. Initially performed in their ‘raw’ state in May 2013 in the ‘Maynard, come home’ Festival these studies are now being developed to form a larger dance installation, including sound and video, with long term collaborator Barnaby Oliver and film maker Tanya Syed.

The next outing is during a residency at Oriel Davies Gallery, Newtown, Powys 5- 22 October 2015. There will be an online diary during this time on: www.simonwhitehead.net Details to follow… 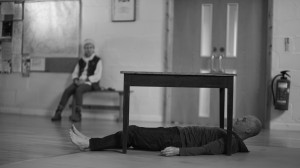 Over the last 2 years i have made regular field recordings in Coedmor, a place i pass through on my walk, or cycle to my studio in Llangoedmor, in the lower Tefi valley. As part of his commission for Studies for Maynard my collaborator and Melbourne- based sound artist Barnaby Oliver has laid down some of these original field recordings in a timeline. In 3 live studio sessions in May he added accompaniment with piano, violin, harmonica and banjo.

‘Some of these places I might know, some I don’t. In my studio halfway around the world I listen, and imagine I can play my way into these places. When I’m there, I don’t do much, just look, listen and be part of things.’

‘It seems to me that home, being at home, with all its complexities and current implications is something that we could try to understand differently, to re-imagine.
In Studies for Maynard i have spent 2 years wrestling with what it means to be at home. I have returned to the studio and the more i move, i come to realise that home is not a place, but a verb, a practice of making and motion. Constantly making and remaking home, wherever we happen to be.
Homing is part of a wider emotional ecology, the act of living well as human beings together and with the cosmos.
Studies for Maynard is a dance with a table, in it i try to think about what it is to be located at home, whilst holding the wider curve of the earth.’
SW